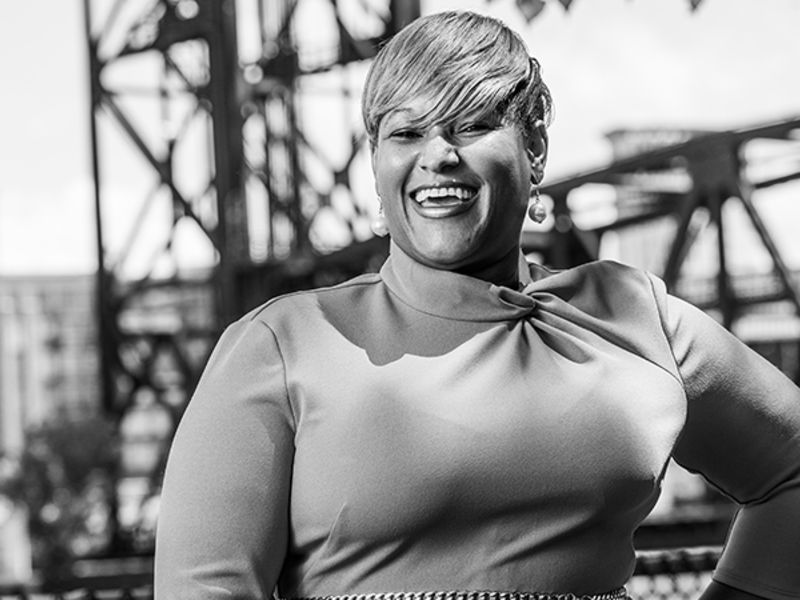 Young and already ambitious, Teleangé Thomas imagined herself as a high-level legal adviser akin to her favorite fictional pioneer – Clair Huxtable of “The Cosby Show”.

“I saw myself having a legal career because that’s what Clair Huxtable did, but I didn’t want to be in the courtroom,” the Alliance native said. “I wanted to cross that with business. I always saw myself owning or operating a business, doing business, creating opportunities and all that.

Today, Thomas brings that pioneering energy to the northeast Ohio entrepreneurial ecosystem as a member of the JumpStart leadership team. She joined the nonprofit in January 2021, taking on the newly created position of Advancement and Relations Manager and bringing over 20 years of experience in public health and nonprofit management. Later that year, Thomas, who holds a degree in business administration from Case Western Reserve University, took over the operations function of JumpStart.

Thomas said that while promoting social and economic equality was a common thread in previous leadership roles at Candid, the Sisters of Charity Foundation, University Hospitals and the Cleveland Department of Public Health, the JumpStart’s opportunity was a perfect fit with his own desire to have a more direct impact. on the region’s economic prosperity, particularly with regard to inclusiveness.

“It was a reality of what was happening in society,” she said. “Things that were very deeply personal and had always been important to me from a value perspective suddenly took on a new level of emphasis and a new level of urgency. … I knew I wanted to get closer to influence access to resources and more closely aligned with wealth creation.

In his current role, Thomas manages strategic operations and fundraising initiatives for the 70-person JumpStart. She is also responsible for strengthening partnerships and leading her involvement in civic initiatives, including the Cleveland Innovation Project and the MidTown Innovation District. Like JumpStart, a key tenant of these initiatives, Thomas said, is economic growth that benefits everyone.

“(JumpStart) invests in the individual entrepreneur, their hopes, dreams and success, but our success is truly rooted in how the communities we serve are impacted from a broader economic development and bottom line perspective. “, she said.

“There is this long held belief that job opportunities and economic growth will automatically improve the lives of community members, but you need to understand that in underserved communities their lives are affected and impacted by disparities in health, institutional racism and many other things than just unemployment,” he said. “Teleangé has spent years understanding these realities and turning that understanding into something that can improve the community.”

In addition to keeping “an eye and focus on equity” — as it relates to people of color as well as other underrepresented communities such as LGBTQ people — Thomas said she hopes to provide more support. women entrepreneurs and creatives.

“Northeast Ohio has an appreciation for art and culture and a wealth of creative talent,” she said. “I would like to see us think about how we can raise them as small business owners and entrepreneurs.”

Thomas serves on the boards of Community Health Charities, Policy Matters Ohio, Green City Growers, Conservancy of Cuyahoga Valley National Park, and Cleveland Public Library. She is a Fellow of the Robert Wood Johnson Foundation, has been published in academic journals, and is a member of the Zeta Phi Beta Sorority and the Order of the Eastern Star. CLEVELAND, Ohio (WOIO) – If you’re looking for a job, it’s a buyer’s market, even as expanded unemployment benefits in Ohio expire on June 26. Dalithia Smith, director of human

An estimated 1,351,090 Ohioans are going hungry. Among them are 412,670 children. The hunger problem is compounded by high food and fuel prices, the housing crisis and supply chain issues.